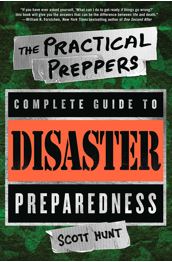 Here is a great summer read.  My subscribers know that the book that really started me down this path is William Forstchen’s “One Second After” (about which I’ve written elsewhere).  As I meet others from around the country, many of them tell me that that is the book that started them as well.  Another book I’ve considered to be a must read is James Wesley Rawles “How to Survive the End of the World as We Know It“.  Forstchen’s book is fiction based on a possible scenario, whereas Rawles’ book is an exhaustive “how to” book with great technical detail.  Well, here’s my next pick which I consider equal to the other two, and one that every homesteader or prepper should own:  The “Complete Guide to Disaster Preparedness” by Scott Hunt of Practical Preppers.

Some of you already know of Scott.  He is known as Engineer775 on YouTube that has tens of thousands of subscribers.  Scott is a jack of all trades, but mostly an engineer by trade, prepper by desire and a Godly family man.  One of his claims to fame is that of being a consultant/judge to the National Geographic Channel’s show Doomsday Preppers.  He and I got to know each other while we were both exhibiting at the recent Heritage Life Skills event in Waynesville.  I had already seen many of his videos and even purchased some of his recommended items.  Be warned; if you go to his channel, you can get hooked on it and spend days watching everything from how to produce hot water for bathing from a rocket stove to getting drinking water from slimy pond water to running your truck off fuel created by burning wood (yes, burning wood).  I picked up a copy of his book and have found it a great compliment to others in my library.

Compared to Rawles’ book, Scott’s is a little easier read.  Its well laid out in various subject matters with each section going from the most basic concept of the topic to more involved plans.  There isn’t a topic that’s not covered and one thing I especially like is how well balanced the content.  So many prepper books are heavy on firearms and security.  Scott has a chapter on it, but again its just one of many and its very balanced and easy for the beginner to grasp.  He recognizes that most of us aren’t engineers or have unlimited resources, but has offered up affordable and simple methods the rest of us can understand.  I would not call it a “Prepping for Dummies”.  Its much better than that, and even a seasoned homesteader or prepper will learn a lot from it, but its an easy read.  After all, what good is it to have a book of knowledge if its not easy to read?  Most all of the systems and ideas about which he writes, he has tested and utilized.  Though I’ve never been to his farm, I can only imagine that it would be like going to an amusement park for the first time for those of us who are into this sort of thing.

So visit Scott’s YouTube channel, then pick up a copy of the book.  Whether you’re looking to live off the grid, a sustainable lifestyle or build a survival retreat in the mountains, you’ll be glad you did.