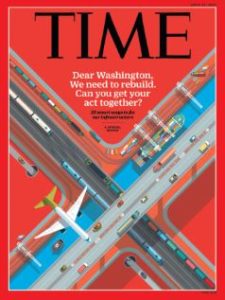 The current issue of Time Magazine has an article titled A Safer Smarter Grid as part of its cover story of America’s aging infrastructure.  I’ve written several times in previous posts about the vulnerability of our nation’s power grid from natural events (ice storms, hurricanes, solar flares) to manmade events (terrorism, mistakes and age).  This article does a good job of explaining the need for a more robust system as we become a more and more wired society.

Power outages from bad weather tend not to last terribly long; usually no more than a week in bad cases such as the 1977 blackout in NYC.  However, the author points to the more scary scenario of a cyber attack on the system and how it could disrupt every day life for months on end.  Eric Spiegel, CEO of Siemens USA states that a smarter grid helps utilities restore power faster during outages, yet at the same time creates more opportunities for hackers to access the system.  Industry officials are referenced in the article stating that the power grid comes under some sort of cyber attack every four days, and their concern is a concentrated attack could leave the entire nation in the dark for weeks or months.  Imagine for a moment what life would be like without power for four weeks on the eastern seaboard.  Its not a pretty thought.  Gas tanks would run dry.  Cell service would go out.  Grocery shelves would be cleaned out.  Electronic banking would freeze up.  And perhaps most worrisome of all, people’s normal civility would go out the window.  In the aforementioned 1977 NYC blackout, looters were burning city blocks within 24 hours.  Imagine how bad it would get in four weeks.

However, the forward thinking homesteader or prepper is ready for these kind of disruptions by having alternate power sources, long term food storage on hand and ways to protect life and property.  We here at Retreat Realty aim to help individuals find resource rich properties in these western North Carolina mountains where they can live without having to be tied to the grid such as the Upper Rock Creek Hideout.  If you’ve contemplated having a bugout property or off the grid property, call us today to discuss how we can help you get started.  You aren’t crazy for thinking about it, and its not hard to get started.