An Evening with Dr. William Forstchen 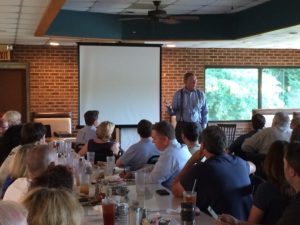 Last night I had the pleasure of introducing Dr. William Forstchen and his wife Robin to the Charlotte chapter of the Carolina Preppers Network.  Around 95 people from as far away as Myrtle Beach attended the dinner and presentation.  They were not disappointed.

As you’ve read in previous posts, I came to know Bill through a mutual friend after moving to Black Mountain in 2014.    Bill shared with the group about how he came to write the seminal, book “One Second After” on life after the detonation of an electromagnetic pulse weapon (EMP), and based it in our town of Black Mountain.  After a few lighter antectodal stories, he opened up the floor to questions and they continued for nearly two hours. 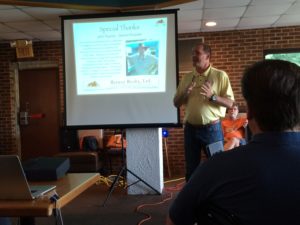 A few words about Retreat Realty

Questions ranged from his opinion as to why our governmental leaders haven’t taken steps to protect the power grid, to his opinion as to the greatest threat to our nation, to a theoretical question he put to generals at the National War College concerning what would they do at our military bases if throngs of citizens approached the gates begging to have their children taken in for safety.  One attendee answered the last question from her personal experience while she and her husband were working in the Phillipines during civil unrest there.  She recounted how she did that very thing.  While trying to flee a riotous crowd of nationals, she stood at the gate of Clark Air Force Base begging the sentries to take her infant child just long enough to get away from the riot, and she was denied her pleadings.

But it wasn’t all doom and gloom.  There were many laughs and light hearted moments such as when Bill explained his theory on why he doesn’t believe in alien life.  Has nothing to do with science.  Instead he jokingly described how teenagers of any species, can still be foolish enough to the point of being a threat to civilization with their antics behind the wheel, whether it be the steering wheel of a Ford or an exotic spaceship.

Of course we all know about bugging out and “getting out of dodge” should an EMP hit, and sitting in Charlotte, Bill related it to his and Robin’s experience of getting to last night’s meeting.  They found themselves stuck in the daily parking lot that is I-485.  His comment was something to the effect of “I don’t know how you guys are going to bug out of town.  I couldn’t hardly get in!” 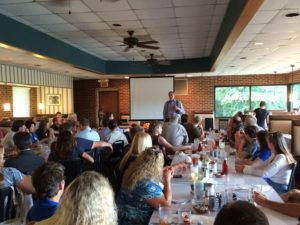 Great attendance at the meeting

So I wish to thank Bill and Robin for attending and for Forrest Garvin, Facilitator of the Carolina Preppers Network for arranging the meeting place.  Bill has offered to speak at other chapters in the future, so those of the Network in other towns will have the opportunity to hear him speak.  We should consider ourselves extremely fortunate to have one of the world’s most respected authors on the subject of preparedness residing right here in North Carolina.  It was my pleasure and honor to have played a small role in making the introduction to Bill to the group.