Another Reason to Prepare 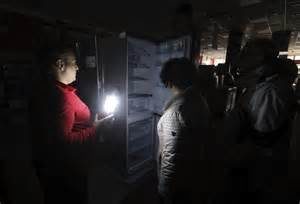 Yet another headline about a major power outage.  This time, its in Crimea, the section of Ukraine which Russia recently annexed.  Don’t think that this is a third world environment accustomed to such inconveniences.  The Crimea may not have a Starbucks on every corner, but its definitely not a backwater area.  It has several modern cities and its coastline is dotted with numerous high end resorts visited by European uber-rich.  So when the power went out two days ago, it plunged nearly one million people into the dark, and the remaining one million are feeling the effects as well.

The cause?  A nationalist terrorist attack  (allegedly Ukrainians upset with Russia) initially took down just two transmission towers (think large telephone poles) and then two more the other day.  That’s it.  Three days later, gas stations are still shut down.  Water supplies have been shut off.  ATM’s stopped working. Factories and schools are closed.

The point is, it could happen here in the US.  I refer again to Ted Koppel’s recent book, “Lights Out, a Cyber Attack, a Nation Unprepared“.  Granted, I consider the redundancies and contingencies of our national power grid are likely more robust than those of The Crimea.  However, as top government, security and industry officials have been saying for years, the power grid is this nation’s Achilles Heel.  Much more damage can be done with a few keystrokes.

So what would you do if this happened across your state or region of the country?  Are you prepared?  Do you have a place to go to where you can ride out the storm?  If not, contact us today and we’ll show you properties here in western North Carolina that could offer you the peace of mind you’ll be craving when it does happen.