Britain’s Vote On The 23rd? 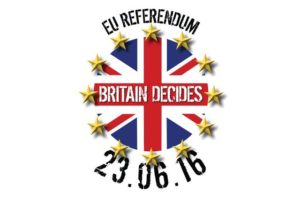 Why should we care about Britain’s vote on the 23rd?  If you’ve not been following overseas news lately, you may have missed the debate about Britain’s historic vote on June 23rd in which its citizens will decide if they will become masters of their own destiny and freedom or held in bondage to unelected and un-impeachable European bureaucrats of the European Union.  You can tell from my phrasing as to which way I’d vote, but I encourage you to take the time to watch the one hour documentary “Brexit, The Movie“.

Its a very enlightening, insightful and sometimes humorous expose of the inner workings of the EU and what membership has meant to its member nations.  Why should it interest us here in the United States?  Because the EU governmental bureaucracy is where the United States Federal Government is heading.  I had no idea as to the extent, size and power a few unelected officials in the EU control over so many.  When non-elected people are given power without checks and balances, tyranny and suppression of free markets follows.  The bureaucracy is so bloated with so many commissions and departments that no one actually knows who is in control, thus making it impossible to reverse bad decisions.

There is too much to simply explain in this blog, so watch the documentary.  It is mind blowing.  Then stop to look at what you read about our own bloated federal government and millions of regulations on everything that infringes on your daily life.  As these onerous regulations pile up and government gets top heavy, eventually it falls, and who does it fall upon?  You and I.  Economic collapse is the final result and resetting point.  Therefore, its important that you and your family be ready for that day.

On this blog, I write about terrorist attacks, cyber-attacks, natural disasters and such.  But economic collapse is just as real and even more predictable.  Don’t delay in getting ready.  Start your planning today by contacting Retreat Realty to find your ideal North Carolina mountain survival property.  When we start having runs on the banks and grocery store shelves go bare, you’ll be glad you did.