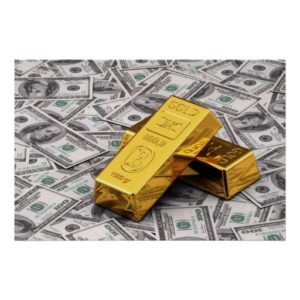 When most people hear the word “fiat”, they think of the Italian auto company that builds tiny cars sold via edgy television ads.  However, when put into the financial world, “fiat money” simply means a sovereign (i.e. government) created paper currency that is printed out of thin air with nothing to back it up.  That’s basically where we find the U.S. Dollar today.  Its paper money backed by the full faith and credit of the United States.  Sounds good, but in truth how creditworthy is the United States government?  Not very.

With the current U.S. debt at more than $19 trillion and (depending on whom you cite) unfunded government liabilities such as Medicare, government pensions and Social Security between $30 trillion to $128 trillion, we all agree our federal government’s balance sheet is a mess and at some point it will come crashing down.  When it does, the U.S. Dollar will go with it.  That’s why its good to diversify and take some of that cash out of your wallet and put it into other currency forms.  I’m not talking about other foreign currencies.  Most of them are no better than the U.S. Dollar.

Since the beginning of recorded history, gold and silver have always been safe havens in times of trouble and often the “go to” currency.  In a grid down situation when the ATM’s stop spitting out dollars, small amounts of gold and silver will reign.  But you don’t have to have pure gold or silver bullion.  You can use “junk silver”.

Junk silver isn’t really junk.  Its pre-1964 quarters and dimes.  Those minted prior to 1964 were made with 90% silver.  You can buy this kind of coinage relatively easy and inexpensively compared to gold and silver coins or bullion. You may even have some in between the cushions of your living room sofa.

Another source of currency in a grid down scenario is that of items with which you can trade and barter.  Lets face it, most of us don’t have a clue how to do the things our great grandparents did such as making clothes, or soap, or plowing a field or putting up meat for the winter.  If you don’t know how to do it, then you’re going to have to find someone who does, and they’ll demand payment.  Cigarettes, alcohol and ammunition will quickly become high demand barter items.

I don’t smoke or drink, but I know the value of these items, and once the power grid goes down, they’ll be in huge demand.  I don’t have alcohol as part of my bartering bag simply because I don’t drink and its use often has very negative consequences.  But cigarettes and ammo are definitely great items to have available for bartering.  In fact, just about any commodity will do, such as sugar, salt, batteries or even feminine hygiene products.  The list is almost endless.

So what about cash?  While I am totally bearish on the Dollar, I still advise keeping some cash on  hand.  Why?  In a grid down world, ATM’s and credit cards will cease to function.  Therefore, shopkeepers will demand cash (at least initially). After a couple of weeks people will finally realize their paper is worthless because there’s no government to back it up and no banks to accept it.  Keep the denominations small (nothing over a $20).  Even if nothing happens, you can always use it every day.  Just keep it in a safe place till needed.

So the lesson for today is “diversify” your currency, and you’ll be better prepared than the vast majority out there who live on plastic.