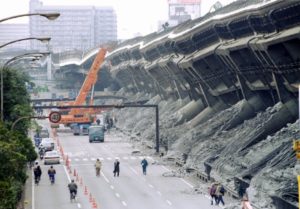 Had an interesting conversation with close family members the other night who lived in Japan for many years in Osaka and Kobe, two extremely large metro areas.  While there, they lived through the 1995 Great Hanshin Earthquake.

Most of us here in the U.S. don’t remember that incident, however, it was one of the worst earthquakes in recorded history, happening almost directly under the two cities of four million.  More than 6,000 people died.  An estimated 250,000 homes and buildings were destroyed or severely damaged by the earthquake.  One of my family members was walking out the door at 5:36 AM when the earthquake struck.  Thousands of homes burned in fires that raged with abandon for days since the water lines ruptured and pumping stations were destroyed.  The major port of Kobe had its state of the art container shipping centers turn to mush and fall into the bay.  It was utter chaos from an emergency response perspective.  You may recall seeing images of elevated highways laying on their sides.    However, in typical Japanese fashion, there was practically no looting.  People obediently stood in line for hours to get a handful of rice or bottle of water.  Remarkable people.  Sadly, you and I know our fellow American’s wouldn’t be as stoic. 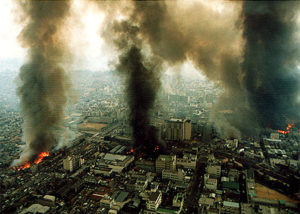 My family members lived for two months without water and heat (it was January), although their electricity returned within a day.  They were among the more fortunate.  As a result, they kept a “Get Out Of Dodge” bag at the ready at all times which included clothing, water, medicines, etc.  Now that they live in the U.S. they are still ready for most any disaster here.

The other night they forwarded me an online document recently distributed for free by the government of Tokyo to its citizens to better help them prepare for an earthquake.  The prediction is that Tokyo has a 70% chance of suffering through a major earthquake in the next 30 years.  So what has that to do with us here in Western North Carolina?  The “Disaster Preparedness Tokyo” booklet is a wealth of information that can be beneficial to anyone facing a natural disaster.  Click here to read the article and then read the 31 page Tokyo survival tips which has all manner of tips on how to use household items for emergency purposes.  Many of them are surprisingly simple yet incredibly creative.  Leave it to the Japanese.  Could make a very bad day into a tolerable day and possibly save a life.