Protecting Electronics from an EMP 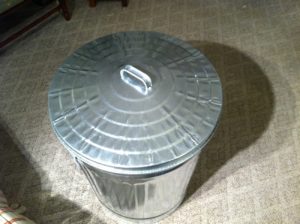 Protecting electronics from an EMP needn’t be complex or expensive.  It can be done with every day items, and be very effective.  First, what is an EMP?

Regular readers know that an EMP stands for an Electro Magnetic Pulse.  Depending on a variety of factors, an EMP has the ability to do considerable damage to electronics, thus interrupting communications, transportation, electronic banking, etc. on a nationwide scale.  Sounds like bad science fiction, but it isn’t.  The reality has been known for a very long time and large scale tests were carried out by the U.S. and U.S.S.R. in the early 60’s with shocking results.  Streetlights and phone systems were shut down in Honolulu more than 898 miles away from the test site.  Read about it here on Wikipedia.

An EMP can be the result of a manmade nuclear detonation high above the Earth or a naturally occurring coronal mass ejection (CME) from the Sun such as that which happened on September 1, 1859, later named “The Carrington Event“.  At that time, the Earth was in the direct path of a CME which resulted in telegraph equipment being rendered inoperable and in some cases catching fire around the world.  Scientists estimate that if such an event happened today, 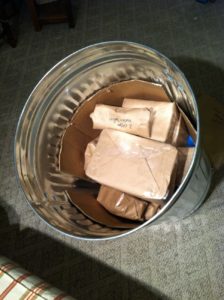 the world economy would instantly grind to a halt now that we are so dependent upon electricity.  If you want more in depth explanations about an EMP, do a google search; you’ll find mountains of data.  Some of it is speculation, but one of the best sources I’ve yet found is in a book written by Dr. Arthur T. Bradley, Ph. D., an electronic engineer working for NASA titled “Disaster Preparedness for EMP Attacks and Solar Storms, Expanded Edition”.  Enough about the basics.  So how do you protect your electronics?

The basic thing is to shield your electronics in a container that will transfer the electronic pulse around your items and then ground out the pulse.  This is what is known as a Faraday Cage named after the British scientist Michael Faraday, considered the founder of the science of magnetism.  I simply purchased a large galvanized trash can at the home supply store, lined the interior with cardboard, then placed my sensitive electronics inside.  The electronics are enclosed in their original boxes which I’ve wrapped in multiple layers of heavy aluminum foil which I then wrapped in heavy brown wrapping paper (like the kind you get at the UPS Store).  This brown wrapping paper protects the fragile aluminum foil from getting torn when handling.  Once all the items are placed in the trash can, simply put the tight fitting lid on the can, and you’re done. 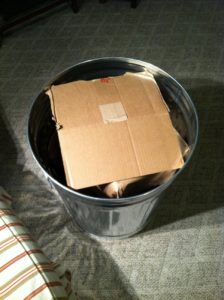 How do I know it works?  A simple test is to place a turned on radio inside with the volume up, then place it inside the closed trash can.  If the radio goes silent, you know you’ve got a good set up.  Another test was conducted by Lisa Bedford the “Survival Mom” when she used a variety of items on a mountaintop at the foot of several radio transmission towers with more than 9 million watts of output.  You can read about her experience here.  The galvanized trash can proved most effective.  But if that isn’t scientific enough, in the aforementioned book, Dr. Bradley conducted a more stringent series of tests using ten different electromagnetic frequencies with multiple protective enclosures.  Among the most effective, and certainly the most economical was the lowly galvanized trash can.  To add an extra layer of protection, simply wrap your electronics in foil and wrapping paper as I’ve done.

That’s all there is to it.  Questions remain as to what electronics are most vulnerable, but the fact is that we are so dependent upon sensitive electronics that just about anything that will fit, that could be helpful in a grid down situation should be considered for inclusion.  What have I stored?  Write me and I’ll be glad to share the contents of my EMP can(s).