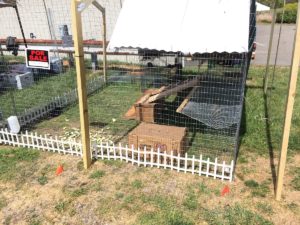 Raising rabbits as a food source is something most of us find unsettling.  After all, how could one butcher a cute bunny?  But when the economy tanks and the grocery stores are stripped bare, our attitudes will change.  During the recent Heritage Life Skills event my display was next to that of Priya Allen and her father who were displaying their rabbits.

They had built a 12′ x 10′ wooden frame then lined the inside with chicken wire, including on the ground so the rabbits couldn’t dig their way out, and they covered the top as well to keep predatory birds away.  Priya is a high school senior heading to NC State for veterinary school and assisted in the teaching of two classes on raising rabbits.  She told me that many people raise them in small hutches which confine them whereas she uses a “colony” system like the one on display.  Said it is healthier for the rabbits as they have more room to roam and socialize. 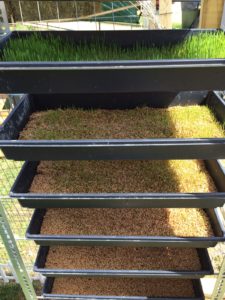 They eat lots of weeds, mostly things you can find in your own yard.  They also feed them alfalfa hay and wheat grass which they were growing on display.  The growing method was simple and fascinating.  They’d taken seven shallow plastic trays, perforated with holes and stacked them on a rack, one above the other.  They then poured wheat grass seed in each one and every so often poured water into the top tray and let the water percolate downward.  Over just a matter of days, the seeds in the topmost trays began sprouting.  In the short three days I was there, I saw them go from seeds to green grass.  No fertilizer or soil, just water and seeds.  One tray can become five pounds of feed.

This became feed for the rabbits along with expired vegetables they had obtained from their local grocery store.  They also did a “weed walk” around the grounds, pointing out to class participants, all the things you can feed them as well as those we humans can eat.

I was told that in about 12 weeks the rabbits would be ready for “harvesting” and good to eat.  They can grow up to eight pounds in about 16 weeks, but the meat gets tougher.  As we’ve all heard, rabbits can breed rapidly and that is one thing that makes them a great source for off the grid living.  Priya said they tend to breed their rabbits every three months so as to give them rest between cycles.  It was a fascinating experience to hear her teach others on the idea of raising rabbits for food.  Its such a simple technique that takes up little space and should be in every prepper’s idea book. 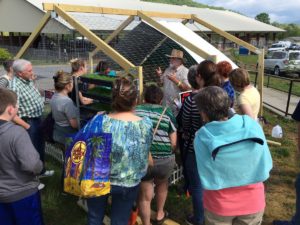 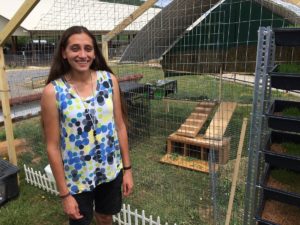 Priya and her rabbits