The Best Currency in Ukraine 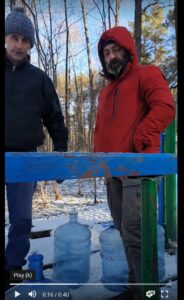 Friends of Alex at the spring

A member of our church is personal friends with a gentleman named Alex in Ukraine with whom he’s come to know after having visited Ukraine on numerous mission trips.  Over the past two weeks this friend has been forwarded video reports from Alex showing what life is truly like during this Russian invasion.  In the prepping world, we think of scenarios and theories, but fortunately have never had to put them into place.  But seeing these unedited reports brings it home. Here we have a modern country that is very western in look and feel, yet millions are now refugees.  If it is happening there, why not here?  Would you be ready?

In today’s message, Alex shares a video in which he traveled five hours into the forest to locate a spring from which to draw water because the water plant in their town is under threat and access to nearby springs was denied.  During the report he mentions that his father always hid bottles of vodka throughout his house.  Alex never understood why until now.  Click here for a link to the video.  Here is an excerpt from his message:

“I was always surprised that my dad, Franz, was buying vodka and was hiding all around his apartments. When he passed away, my brother took almost 60 bottles of Vodka of different kinds. Franz was telling me that Vodka is the most liquid currency.

Now, when Vodka and any alcohol is prohibited, I start to understand the meaning of this currency. I’m sure with a bottle of Vodka you can do more than with money. Just think what has more meaning for a Russian/or Ukrainian soldier in the checkpoint after 12 hours in the open air, a gift of 100 USD, or a bottle of Vodka.” – Alex in Ukraine

What he testifies to is what preppers have preached for years; that in times of war/collapse/civil unrest, alcohol becomes a popular currency.  I don’t drink alcohol, but if the economy collapses one should think of alternative forms of “currency”.  At the top of the list are two vices: alcohol and cigarettes.  Throughout history during times of war, these two commodities have been highly desirable and used for trade.  Most anything could be used for trade and barter, but these two (and bullets) always rise to the top.  Not that we have a liquor store in the basement, but we have various things that could be used if the dollar becomes as worthless as the Russian rubble is today.  Would you be ready if the dollar collapsed as well?  Don’t think it can’t happen here.