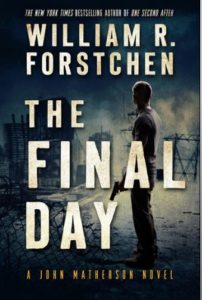 Our good friend and best selling author, Dr. Bill Forstchen has been busy signing copies of his newest book, “The Final Day”.  This is the third and final installment in the “One Second After” trilogy.  The second installment was “One Year After”.  When Bill first told me last summer of the name of this particular book, it left me wondering if it would really be the last book in the series.  I can say that after having read it, it does seem to wrap up everything pretty concisely, although I suppose as with any work, there could be a follow up down the road.  Honestly, I hope the story continues, but if this is the last in the series, Bill is such a prolific author that I’m confident he’ll have another equally enthralling book before long.

For those not familiar with “One Second After“, it chronicles the lives of citizens in my adopted hometown of Black Mountain, North Carolina as they survive the after effects of an Electromagnetic Pulse weapon (an “EMP) which fries the national electric grid and sends the country back hundreds of years.  Its a dark and ruthless world, one that could be put before us in an instant.  You see, although an EMP sounds like science fiction, its not.  Its a very real threat and the technology has long been in the hands of many who would like to unleash it upon the United States.  Tests of EMP’s were conducted by the United States and Soviet Union in the 60’s, and a few years ago, a Congressional Commission was tasked with assessing the readiness of the electrical grid and communications systems against the threat of a cyber and/or physical attack on our nation including an EMP attack.  Sadly, the conclusion was not very encouraging.  Its a very real threat that we should pray never materializes.  (I have a complete copy of the 26 page report and will be glad to send you a copy.)

This is largely the reason Bill wrote the series in the first place.  While they make for good reading, he really intended them to be a wake up call.  He has studied the subject more than most and it scares the lights out of him, and it should concern us too.  He has hoped through the years that Congress would take steps to harden our electrical grid and communications infrastructure against this threat, but that hasn’t happened.  As was told to him by a senator in D.C., “There just isn’t a constituency for action on an EMP.”  That is to say, people don’t know about it and thus don’t care about it and thus there is no need for Congress to funnel dollars into it.  I’m afraid that’s how it will always be with such a fictional sounding issue.

As for the latest book, we find the main character, Colonel John Matherson (Ret) defending the people under his care in Black Mountain against his dearest friend and mentor who is now a senior military commander of the new (and suspected) illegitimate government of the United States.  Can his friend be trusted or will Matherson have to turn against his old buddy?   Once again, Forstchen has written a compelling book that once started, will be hard to put down.  So I encourage you to get your copy today and prepare to be transported to a world without lights at the flip of a switch, the internet or hot showers.  I pray such a thing never happens, but if it does, wouldn’t it be wise to have a bugout or survival property to which you can go to where you’ve made provisions for such an event?  That’s why Retreat Realty exists; to help those with the foresight to prepare against what could come, be it from an EMP, a cyber attack on our power grid, a cyber attack on our electronic banking system, pandemic, natural disaster or just plain ol’ civil unrest (which seems to be in the news more and more).  Call us today to discuss how we can help you find the right western North Carolina prepper property.