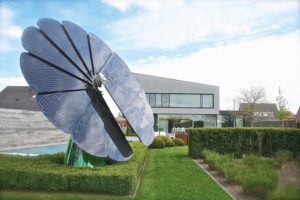 Is the SmartFlower Solar System for you?  Recently while meeting a bridge builder, he told me of a solar system his son had installed at his homestead.  Sounded intriguing.  He said its a small sized system, portable, and tracks with the sun throughout the day.  Tracking with the sun a big plus in that solar panels operate most efficiently when facing directly at the sun.  As the sun rises and sets, a fixed solar panel array only captures ideal sunlight for a short period.  Not so with the SmartFlower Solar System.

This system rests on a pedestal and opens up like a Japanese fan in the morning, rotating on two axis then closes up when the sun goes down.  Not only does it keep the panels at optimal position relative to the sun, it has a self-cleaning feature that keeps the panels free of dust and material that might affect the efficiency of a fixed roof mounted panel system.  Its even portable  Ingenious!  But there’s a catch.

Its expensive.  To get one of these systems with the necessary battery bank, you’re looking at dropping around $22k or $16k without the batteries.  Not only is the initial outlay substantial, a study by the folks at UnderstandSolar.com shows the actual cost to produce a kilowatt of electricity via the SmartFlower system is higher than that of fixed panels.  Click here for the comparison.  Beyond the cost, this system has a number of moving parts that could be subject to breakdown.  That is, a fixed panel array has no moving parts.  Yes, a fixed panel surface can get dusty, but the SmartFlower system rotates on a fully rotating axis and the twelve panels that comprise the arrays fold up at night and open up in the morning.  That means there are a lot of moving parts that must all work in concert.  Additionally, the system isn’t scalable, meaning you can’t just add more panels as desired like you can with a fixed system.  One other thing…..it big!  I mean it requires an area of around 16 to 17 feet square.  Though its touted as “portable”, don’t think for a moment you’re going to carry with you to the beach inside your SUV.  It has be carried on a trailer because it weighs 1,500 pounds.

So there are some real pros and cons for this product.  Check it out if you’re in the market and perhaps it will be right for your specific situation, or you can consider a fixed panel array, just make sure you have plenty of good south facing exposure and a strong back to carry it.