The Upcoming Bank Bail In 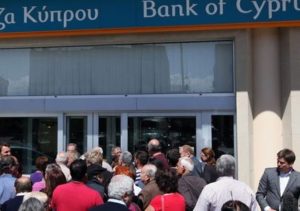 Are you and I going to be part of the upcoming bank bail in?  What is a “Bail In” you ask?  You’re not going to like it.

We’re all familiar with the big bank bailouts of 2008 and 2009 for those banks deemed “too big to fail.”  That’s when our federal government printed trillions of dollars to prop up those banks who mismanaged your own money.  Now that the United States is over $18 trillion in debt with another $100+ trillion of unfunded liabilities and the continuous printing of money has eroded the dollar’s worth, our federal leaders have concluded that it would be political suicide to craft another bailout when the next inevitable bank collapse happens.  Therefore, they have devised a “bail in”.

That is, rather than the government printing and giving cash to failing banks, it will just take the money you have on deposit in your bank accounts and give you an I.O.U. in return.  Yes, this is true and not an internet myth.  It can be found in the Dodd-Frank Bill passed by Congress in 2010.  The EU implemented this same rule on January 1, 2016 and the United States is watching it closely.  You may recall that the nation of Cyprus did this very thing back in July 2013 when its government declared a banking holiday of several days and literally removed 47% of the funds in excess of $100,000 USD in depositor accounts.  You read that right.  If you had accounts of $200,000 USD, 47% of the $100,000 USD was simply taken from you.  What did they get in return?  In exchange, those bank account holders were given I.O.U.’s in the form of newly minted bank stock in the very bank that was failing.  That is, your deposit account is considered a liability of the bank: they owe you that money when you demand it.  You are a creditor of the bank, and technically should be first in line if a bank declares bankruptcy.  However, under the “Adequacy of Loss Absorbing Capacity of Globally Systematically Important Banks in Resolution” approved by the G20’s Financial Stability Board on November 16, 2014,  and the Dodd-Frank Bill, your deposits are changed from a liability to a receivable of the bank as the bank gives you worthless equity in its stock.  Others, particularly something called “derivatives” are put first in line as creditors and you are pushed to the bottom.  “But I don’t have $100,000”, you say.  So what.  It doesn’t matter how much you have on deposit.  The fact that unelected officials can grab anyone’s funds should frighten you.  Its just one more loss of your independence.

Yes, the provisions are on the books here in the U.S. ready to be implemented once we have our next banking crisis, which isn’t far off.  Back in 2008, many banks were deemed “to big to fail”, yet today those same banks are even larger than before.  So guess what?  You won’t be asked to contribute to saving the economy, the Feds will simply take your money.  Don’t like it?  Too bad.  About the only thing you can do now is cash out what you can and put it into other assets and perhaps smaller, local banks that are better managers of their assets.  Gold and silver immediately come to mind as does ammo and other commodities that will hold value in a time of crisis.

Folks, this isn’t conspiracy theory talk.  It has already happened in Cyprus, Poland, Italy and currently happening in Austria.  Its coming our way.  When that day comes, you can expect even greater economic and social unrest here in the U.S., so are you going to have a bug out property or mountain survival property to run to?  Call us today to discuss how to prepare your family and to find the North Carolina Mountain survival property you need.