What’s yours is mine 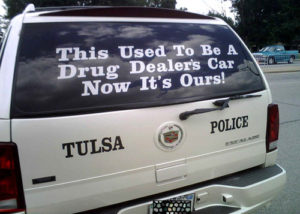 In a “What’s yours is mine” move, police and sheriff departments across the country have been seizing assets from drug dealers and other malcontents for years by using what is known as “civil forfeiture laws”.  Who could object?  Such crooks shouldn’t be allowed to keep their ill gotten gain.  Right?  But what about when they come for yours?

Sadly over the past several years, innocent citizens have been stripped of cash, cars and other assets in their possession during otherwise routine traffic stops.  Under these laws, law enforcement officers can immediately seize cash, silver and gold coins, firearms and even the car WITHOUT charging the driver with a crime or there being any indication the driver is involved in any crime.  Unfortunately, these laws are ripe for abuse as police departments have been using them as a revenue stream.

If this all sounds very draconian, or like fake news, do some research.  Just this week Attorney General Jeff Sessions signed an order expanding the ability of agencies to circumvent state laws intended to curb the abuse.  You don’t have to be charged with a crime, much less convicted in order to have your possessions taken.  To rub further salt in the wound, because this involves a civil case, the accused are not given legal counsel as in criminal cases with a public defender.  The result is that often times, the legal fees necessary to recover one’s possessions often exceed the value of the items.

On February 27th, 2016 in Muskogee County, Oklahoma, the manager of a Taiwanese Christian band was pulled over for a broken tail light.  He was carrying $53,000 cash from concerts and donations to a Thai orphanage and school in Burma.  With no criminal record and no drug paraphernalia or illegal drugs in the vehicle, the sheriff’s department questioned him for six hours before releasing him, but kept the cash citing it was obviously drug money and then charged him with a felony.  Click here to watch the video and read a full report from the nonprofit Institute for Justice.  The cases run from $500 to tens of thousands, and don’t think it can’t happen to you.

So why include this topic on a real estate web site?  Because most folks involved in prepping, homesteading or disaster preparedness keep large amounts of cash and coinage, and also own firearms.  On more than one occasion, I’ve been a little nervous driving to my shooting range with various firearms and ammunition in the back (all legally owned) as a highway patrolman passed by.  Unfortunately, there’s not a lot you can do if a corrupt lawman wants the goods.  As Jeff Sessions has signaled, this well intended practice is likely to only become more and more abusive.  So be careful out on the road as you drive up to our beautiful mountains to find the perfect bugout property (such as this off the grid homestead or this one with two homes on 8 acres) where you can bury all that hard earned cash and gold!