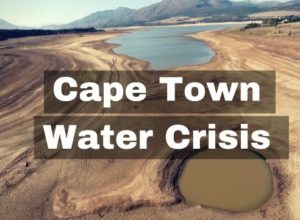 If you’ve not yet heard of Cape Town’s Day Zero, do a google search or just read about it here in USA Today.  “Day Zero” is the day government officials in Cape Town, South Africa estimate the city’s taps will run dry.  Due to years of drought and a very dry winter, the water supply for this city of 3.7 million is nearly exhausted.

Day Zero was previously estimated to have been a few days ago, but due to serious water conservation measures, they’ve been able to stretch their water supply for a couple of more months.  Presently, the limit is 13.2 gallons per day per person.  That may sound like a lot, but remember that a ten minute shower can easily use that much, then factor in toilet flushes, then figure water for cooking, laundry and not to mention drinking.  It isn’t all just about one’s drinking or bathing habits.  It has affected industry and the economy.  Corporate meetings have been cancelled.  Sporting events have gone elsewhere.  Manufacturing has been seriously affected.

However, one interesting observation has been that those in the poorer areas (sometimes in shanty towns) have been less affected because many of them don’t even have indoor plumbing, so things are closer to normal versus those in the wealthier suburbs who are accustomed to just turning on the tap without thinking from where the water comes.  This should hit home with all of us.  We simply expect water anytime we want it, and it is to be inexpensive.  But what if your town’s water plant failed for an extended period of time?  That is one reason to find a property to go to or live on today that has a good spring or creek such our Ken Cove Creek property with its rushing creek and pond or this newly listed 91 acres with not one, but two creeks.  If you don’t have that luxury, then purchase rain barrels with which you can collect rainwater.  I own several.  Just be sure you have a good water filter.  Of course we can all do better with general conservation.  My father was in the Navy and back then while onboard ship when showering, they got wet, turned off the tap, soaped up, rinsed off and were done.  It was a habit that stuck with him long after.  You may not go to that extreme, but you can certainly reduce your daily water consumption, and when you do, give thanks for that water and remember the millions in Cape Town.