Cooking with the Sun 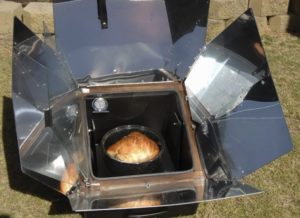 People have cooked with the sun for centuries, however, given the ease with which we can press a button on an electric range, its no wonder we haven’t paid much attention to solar cooking.  But what if the power to your range went out, or the gas to your cook top suddenly stopped flowing?

Sure, you could build a fire or cook on the grill (so long as the propane or charcoal remained), but what about baking bread, cookies, even meatloaf?  Introducing the Sun Oven.  The Sun Oven is a most simple, ingenious contraption that you can take most anywhere and bake just about anything without electricity or gas.

Its simple to set up and within about 20 minutes of positioning in the sunlight and closing the lid, the temperature inside the oven can climb to 150 degrees and ultimately reach well over 200 degrees.  That may not sound hot enough to bake and cook, but remember that if you’re using a recipe that calls for water or any liquid, water can’t get hotter than 212 degrees without a pressure cooker.  Higher cooking temperatures are basically to provide shorter cooking times and browning of foods.  Most any food you want to cook will cook just fine in a solar oven.  However, in a Sun Oven, it may take a little longer to bake bread or a casserole, but it will still brown very evenly.

You can use a Sun Oven year round provided you have off and on sun for an hour or more during cooking.  I own the Sun Oven brand oven.  I suggest getting one with multiple reflectors and go with a more sturdy one.  The less expensive ones tend not to cook as well.  The old saying is true, “You get what you pay for.”, and since you’re likely to only own one solar oven, go ahead and get the right kind.  Otherwise, when the power goes out and you’re trying to bake those cookies, you’ll be wishing you had invested the money if you went cheap on your purchase.