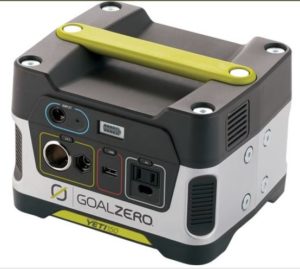 We simply don’t realize how dependent we are on electricity.  When the power goes out, what will you use to operate the lights, appliances, CPAP machines, etc.?  Some folks will say “We have a generator.”  That’s great, as long as you have fuel to run it.  But if we find ourselves in a major “grid down” situation, the fuel will soon stop flowing. Furthermore, gas or diesel generators must be operated outside due to their exhaust.  All I can say is that if you have a portable generator, it had better be chained to the house because in the eerie quiet, it could be a homing beacon for any ner-do-well who would like to walk away with it.

A very good, albeit not as powerful option, is the Yeti Solar Generator by Goal Zero.  The Yeti comes in several sizes and is totally silent.  Because it uses solar power, it will never run out of a fuel source although it has limitations as do any solar systems. However, this one has the added benefit of being able to be charged from a wall outlet.  Therefore, you can simply keep it plugged in, and once the power goes out, you have instant, silent electricity.  Once it runs down, it can be recharged using solar panels or even from your car. 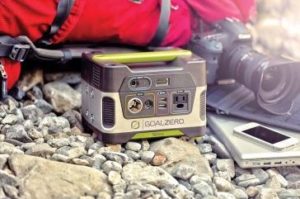 I own the smaller model, the Yeti 150 which is not much bigger than a lunch box.  Basically its a deep cell rechargeble battery with various outlets.  I can plug in a standard three pronged cord, two USB components, a 12 volt item (like the kind you plug into a cigarette lighter in your car) and any proprietary Goal Zero lighting appliance.  In the case of the latter, I have several Goal Zero Light-A-Life LED lamps that can be strung together and illuminate a huge area.  Its not powerful enough to run a refrigerator or space heater, but it certainly makes life a lot more bearable.  Example, you can recharge all sizes of small batteries and two-way radios.

But don’t think that the Yeti is only good for emergency situations.  If you like to go camping or boating, take it with you and you can run your laptop, cell phone, tablet or even a mini-LED projector.  Again, its easy to carry, silent, no fumes, and endless fuel from the sun.  To get maximum benefit, I recommend having at least two or three Boulder 30 solar panels.  These are intended to be for more permanent use, but if you want something that is easily transportable, then go with the Nomad 20 panel which folds up to the size of a tablet.

The quality of the product is outstanding and the versatility is great.  If I were to do it over again, I’d step up to the larger Yeti 400 or even the Yeti 1250 which can operate a mini-fridge.  Takes longer to recharge than on solar panels, but once you’ve made the investment you’ll have it forever.