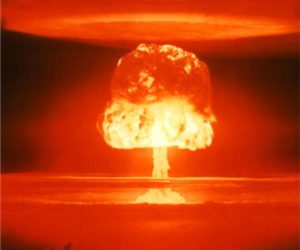 A few days ago it seemed almost as if the United States was about to go from 50 states to 49.  That’s when the emergency broadcast center in Hawaii sent out an alarming notice of an inbound ballistic missile.  For those of us sitting comfortably thousands of miles away, it barely registered.  However, for those in Hawaii, it was absolutely terrifying.

The reactions of residents scrambling for shelter, calling loved ones and leaving “final messages” on Facebook and other outlets shows just how seriously on edge the world is at present.  Of course we all know it was a false alarm, but the reaction was very real, and the underlying threat that made the announcement so plausible is also very real.  With North Korea armed with more and more sophisticated delivery systems and a drive to have nuclear weapons as a deterrent against an attack, its not hard to envision someone making a serious mistake and launching something by accident.  That is, its not that one country or another actually intends to launch, its that there are so many opportunities for failure within the system of command and control that could result in an unintended but actual launch.  With that knowledge, its no surprise that residents of Hawaii went crazy with fear, then crazy with anger at their government officials.

The thought of a nuclear detonation somewhere in the continental United States isn’t farfetched.  The impact on us all would be staggering beyond belief.  Let us pray it never happens.  But if it did…..or if there was a major chemical plant explosion near your town, or a sudden mud flow (Montecito, California), or ice storm and power outage for weeks, would you be prepared?  I have a client who was six weeks without power in St. Croix after Hurricane Maria (and he is a prepper).  The time to prepare for such things is when things are calm.  Its too late when they’re happening.  One of those preparations you might consider is a bugout property somewhere that tends to be rural, away from population centers and in an area not prone to severe weather extremes.  Here in the mountains of western North Carolina, there are many such properties that can provide security, resources and good neighbors to boot.  Plus I don’t think we’re in the crosshairs of any nuclear armed enemy.  Give us a call if you’ve considered looking for a retreat or prepper property.  We’ll be glad to assist you in your search.