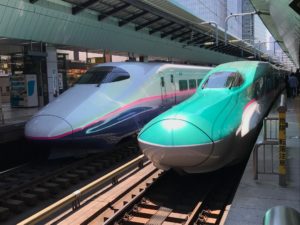 I just returned from another extended trip to Japan, where once again I was blown away with the infrastructure that keeps this country humming.  The Far East is very different than the west in many respects, and in Japan one thing that always impresses me is its ability to move vast amounts of people efficiently, safely and economically throughout the nation. Though it only contains the same area as that of California, it has a population of more than 126 million versus California’s 39 million.  Furthermore, the vast majority of these 126 million people live on just 16% of the land mass, that being in mega cities such as Tokyo, Osaka, Nagoya, etc.

Within these cities and extending throughout the rural parts of the nation, there is a rail system unlike anything else in the world.  You’ve heard of the famous bullet trains “Shinkansens” but there are many other private local lines including subways and tramways to move people.  Never in the history of their operation have the Shinkansens, which travel more than 180 MPH in some cases has there been a single accident.  All of this people moving power runs on electricity.  You can almost feel its energy standing on the train platforms as one train after another (often times longer than two football fields) comes and goes.  Then there are the lights of the cities.

We all know about Times Square in New York, but Tokyo (as well as Osaka) has numerous areas comparable to Times Square when it comes to neon and traffic.  Its an amazing thing to witness.  But I’m reminded of the fact that all of this operates on electricity.  Should there be a major power outage, what would happen to the 14 million people who call Tokyo home?  Japan is well prepared for natural disasters, having learned from experiencing so many earthquakes such as the 1995 Great Hanshin Quake which killed over 5,000 and destroyed more than 250,000 homes; or the Tsunami of 2011 which took an estimated 19,000 lives.  But even as prepared as this nation is, without power, one of the world’s leading economic giants would grind to a halt.  But it isn’t just natural disasters or power outages that could disrupt this nation.

Ever present on the minds of the Japanese is their hostile neighbor located just 633 miles to the northwest: North Korea which has fired ballistic missiles over its territory and threatened it numerous times.  The point being, this is a nation that is always under threat, and as a result they are better prepared than we here in the U.S.

A natural disaster or major power outage could happen at any time here in the U.S. and be just as disruptive.  One way to prepare for such is to have a homestead in a rural area that can be self-sustaining.  We here at Retreat Realty have several off-grid properties listed for sale and others that could be taken off-grid and made independently sustainable, providing food, shelter and resources for you and your family.  But at the same time, they can provide an enjoyable vacation type home in the meantime should nothing ever seriously happen.  So call us today to see how we can assist you in your search for that mountain home or bugout property.