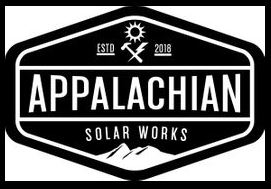 The other day, I had a chance encounter with Chad Colwell, Co-Owner of Appalachian Solar Works.  I was leaving Staples when this large utility van pulled up with their logo all over it, so I snapped a photo for future reference.  Out popped Chad and we struck up a conversation.

Turns out he did the solar installation on a property I was recently asked about listing up in the Bakersville area.  This system is the largest private solar system I’ve seen on a single family house.  It has two battery banks each the size of a Toyota Prius and produced up to 50,000 watts.  Talk about a major system.  The owner of the property is still interested in selling, but strict confidentiality conditions apply, so only ask if you can stroke a check for several million dollars as this property has much more than just a high powered solar system.

Given that Chad was the installer on that system, that immediately validated his credentials for me.  Many clients of Retreat Realty wish to utilize solar or other alternative energy systems.  Solar certainly can work well here in the western North Carolina mountains, but wind is another consideration.  We don’t have the consistent wind flow as people do out west on the plains, but with the right system and exposure, it can be possible to generate a fair amount of electricity from wind up here.  Chad recommends the “Be Wind” system which is a new totally different design that can produce substantial power at lower wind velocities.  Additionally, the these turbines aren’t nearly as visually intrusive as the tall windmill types.  Click here to learn more.

In addition, Chad’s company is the area distributor for the Goal Zero brand of solar generators.  I know this product well as I own two of them and have put them to use during power outages.  They are sophisticated battery cells of varying sizes and outputs that you can charge via a wall outlet or via solar panels.  I have several panels.  Then when needed, simply plug in your laptop, fans, lighting, even a refrigerator if you have a large enough system.  They even make one now with a whole house interface.  Imagine having your own renewable power source without dealing with gasoline, fumes, noise, etc.  For a prepper who wants to keep a low profile during a power outage (that’s called “operational security”), Goal Zero is the way to go.  So check out Appalachian Solar Works and talk to Chad about your off-grid power needs.