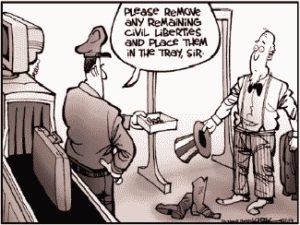 On this July 4th, I hope you are celebrating your liberty.  After all, its been paid for by the blood and sacrifice of countless Americans so that you can enjoy more than hot dogs, fireworks and a day at the beach.  One of the things our forefathers and others purchased with that blood was our guarantee of personal privacy via the Fourth Amendment.  Sadly, we find ourselves in a country under constant surveillance with our privacy and freedoms being gradually eroded away either in the name of security (as in protecting us against terrorism) or in the name of convenience (as in electronic transactions rather than cash purchases).

I recently read the book “Shadow Government” by Grant Jeffery and was stunned with what I discovered; and the book was written in 2009, so who knows how much further things have progressed.  It sounds like science fiction, but its backed up with footnotes and references to source documents, so its accurate.  In a nutshell, go ahead and assume that every one of your phone calls, text messages, emails and electronic purchases or banking transactions are recorded and filtered for key words the various agencies consider “markers” of unsavory activity.  Yes, that amounts to billions of electronic records every day.  Think these agencies don’t have enough memory storage or capacity to track them all?  Think again.  The very technology that provides you more computing power in your three year old iPhone than that which powered the entire Apollo space missions is the same technology on steroids in the hands of these various agencies.  How many agencies?

There are over 17 documented federal level intelligence agencies that all want to know your business.  Everyone knows the biggies such as the CIA, NSA and FBI or Homeland Security.  But how about the Treasury’s Office of Intelligence and Analysis or the Department of Energy’s Office of Intelligence and Counterintelligence, or the National Geospatial Intelligence Agency, not to mention the intelligence arms of each branch of the armed services?  Months ago I read “Top Secret America”, written by Washington Post reporter Dana Priest which goes into great depth about all these various agencies and their unchecked growth over the past ten years and the hundreds of thousands they employ.  She reveals there are over 1,200 sub-agencies and private corporations collaborating with the government in the accumulation of your data.  But one of the most disturbing aspects was that although they are all supposed to be working toward the same goal, they don’t communicate or share information as you’d think they would.  So here we have this enormous bureaucracy with all this power and all this technology and untold billions to spend with little oversight gathering every bit of possible information on you.  Its crazy and it doesn’t bode well for you if you should get somebody mad at you.  Think about it.

So what’s the point of all this?  Basically, there’s little you or I can do to keep prying eyes away, so I’ve just accepted it and live with it.  After all, I already assume I’m on “the list” of these agencies.  But having a totally off the grid bugout property could be a real asset in helping protect your privacy, at least locally.  So call us today and let us help you find that ideal North Carolina mountain property that will help you bugout from the rest of the world.  (and we promise not to share your location with any of these seventeen, or 1,200)  In the meantime, put on the sunscreen and don’t O.D. on the hot dogs and ice cream this Fourth of July!  Happy Birthday America!