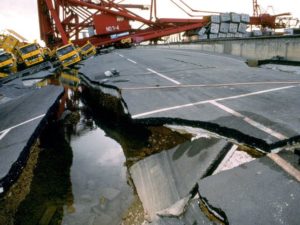 The other morning, I was awakened around 4:15 AM being shaken by an earthquake that occurred in eastern Tennessee.  It lasted for about five seconds, and I immediately concluded that’s what it was.  No damage was reported and I immediately drifted back to sleep.  Several years ago while living in Boone, I’d felt the earthquake that occurred up near Washington, D.C. in 2011 and remember the feeling.

Earthquakes around western North Carolina are rare but not unusual.  They just aren’t as significant as those in California or Alaska.  But the fact that they occur and occur without warning is a reminder that we should always be prepared for the unexpected.  I wrote a couple of years ago about my in-laws who were career missionaries in Japan and their experiences with earthquakes.  In particular, they survived the Great Hanshin Earthquake which hit Kobe on January 17, 1995.  My father-in-law was stepping out the house around 5:43 AM to walk to the train station when the earthquake hit.  In minutes, over 6,000 lives were lost in this highly urban city of 1.5 million with another three million or so in Osaka which adjoins Kobe.  Multi-story buildings collapsed.  Elevated highways toppled over.  Train tracks bent like wet ramen noodles.  Acres of waterfront liquefied and sank into the harbor.  Then fires erupted everywhere as gas mains ruptured.  In the end over 250,000 structures were destroyed.  Afterward, my in-laws always kept a “go bag” by the door containing important papers, some cash, some water, clothing and food.

As I’ve said before, prepping doesn’t have to mean getting ready for an apocalyptic end of the world, but also includes simply being ready for natural disasters that can come upon us suddenly.  I encourage you to have a “go bag” at the ready in the event you have to suddenly vacate.  The cause could be a wildfire, tornado, flash flood, hurricane or even an earthquake.  Just be prepared.