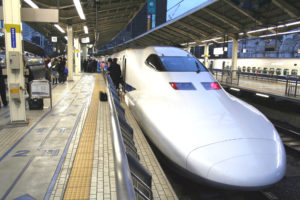 Japan’s Electric Trains:  I just returned from a two week trip to Japan.  It was actually my fifth time there as I’m married to a missionary kid (“MK”) who was born there, as was her father, and his father and his father.  Lots of history in the family.

For my subscribers, you know I’ve included comments about Japan in prior posts due to this personal connection, but also because the Japanese are so well prepared as a nation when it comes to natural disasters.  But one thing I really picked up on during this trip is how much the country’s infrastructure depends on electricity.  The train system in Japan is simply amazing.  You can live your entire life there and never need to own a car. When the shinkansen (“bullet train”) schedule says the train arrives at 10:43 and departs at 10:44, you’d better be on it by 10:44.  Its a blast to travel on these incredible space ship looking machines.  If you’re lucky enough to be on the train platform when an express zips through, count yourself lucky to experience the exhilaration as two football fields’ length of train blows by you in seconds (and they slow down when passing through a station).

But I couldn’t help but think of how much power is required to move one of these trains down the track at 180 MPH.  As I stood on the train platform, I noticed the large insulating jackets on top of some of the cars that connect to the overhead power line.  It struck me that it requires massive amounts of electricity to move the Japanese around the country.  Then to walk through the underground shopping pavilions that go multiple levels deep and filled with people, while wondering what would happen if the power went out?  Imagine your town’s local shopping mall.  Multiply that several times and place it underground at each of the major train stations, then you get an idea as to the size and scope.

This all kind of hit home during one outing when our train came to a stop in the middle of nowhere.  We were informed that a track up ahead had been damaged.  Any delay in Japan’s heralded train system is highly unusual.  We ended up sitting there for nearly two hours before resuming the trip.  We were able to step outside the train, and it was eerily quiet.  It made me think, “What if we had to walk from there?”  Not a pleasant thought.  But it again made me realize how dependent we are upon the consistent flow of electricity, not just in Japan, but here in the states.  Our delay was an inconvenience, but can you imagine if a larger portion of the grid had gone down?  Are you prepared with an alternate power source?  Think about it.

(Just for fun, follow this link to watch some homemade videos other have taken of these trains passing through local stations.  Note: they have slowed down when passing through, so imagine the speed when they’re out in the open.)