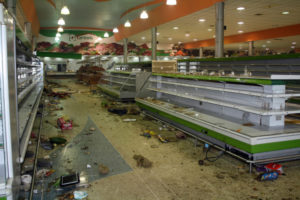 Venezuela unravels and you need to be wondering, “Could this happen in America?”  Venezuela sits on the largest oil reserves in the world.  That’s right, more than Saudi Arabia.  At one time, Venezuela was an economically strong country with among the highest standards of living in South America.  Its capital of Caracas was a bustling cosmopolitan city competing with the capitals of Europe.  But what happened?  Perhaps the more pressing question is “What’s happening now?”, and “Could it happen here?”  The answer is an absolute “Yes, it can happen here.”

Because we are so embroiled in the current presidential race, the NBA finals and what celebrity is divorcing another celebrity, most American’s can’t locate Venezuela on a map, much less even notice what’s happening just south of the border.  For a variety of reasons, most of which comes down to a corrupt socialist government suffering from lower oil prices, Venezuela has descended into chaos.

According to the IMF, the inflation rate this year in Venezuela is expected to near 500% and more than 1,641% next year!  However, wages have plummeted.  The current result is skyrocketing food prices and shortages.  Due to government ineptitude and favors to the politically connected the population of a very westernized society is literally starving.

Food riots are everywhere.  Stores are being ransacked and riot police are out in force.  People both young and old are being killed over food.  Families that once enjoyed a high standard of living are having to choose who gets a meal and who doesn’t.  Read a full article here.  Hard to imagine such a thing happening here in America, but it can, and likely will.  It could be a result of political mismanagement, the debt bomb or a major terrorist attack on our infrastructure.

Our society exists on a razor’s edge of efficiency.  We are so dependent upon electricity and “just in time” delivery of goods and materials that the slightest disruption could send us over the edge.  Grocery stores only keep about two to three days of inventory, so if transportation or manufacturing of all those goodies is interrupted for a week, the stores become empty and neighbors turn on neighbors.  Yes, it can happen here in America, and on smaller scales it already has in places such as New Orleans after Katrina.

That’s why Retreat Realty exists, to help you prepare for those days.  You need a plan, and that plan should involved a bugout property or mountain survival property.  We can help you find the perfect getaway place up here in the western North Carolina mountains.  Just give us a call.