DHS Report On The Power Grid 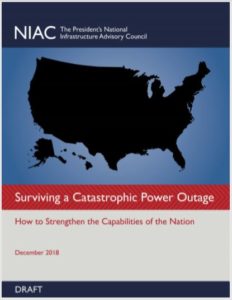 A recently released DHS report on the power grid presents a thorough review of the frailty of our power grid and a potential failure’s long term impact on this nation.  Most folks totally ignore the power grid.  Flip a switch, and the lights come on.  Go to the gas station and the pump starts filling your tank with gas.  Put food in the fridge and it keeps from spoiling.  But everything we have grown accustomed to would come to a screeching halt, and stay that way for a long time according to the report if the power grid were to go down.

Bear in mind that this isn’t the realm of conspiracy theory.  It is a very real threat that has been recognized more and more over the past ten years.  The bottom line is that as a nation becomes more technologically advanced, it depends more and more on electricity to power that technology.  Just think about all the connectivity within your own home, and what would happen.

What is different about this report from its predecessors is that it has a call to action including a request for proposals lead by the National Security Council.  It is also the second such study in the past couple of months.  In November, the Electromagnetic Defense Task Force report outlined the risk to the grid from an electromagnetic pulse (EMP) weapon that could be used by North Korea, Russia or China.  This is the cause in the bestseller One Second After written by friend and neighbor, Bill Forstchen.  However, the primary threat detailed in the more recent report is that of a cyber/terrorist attack on the grid.  I’ve written about such previous small probing attacks such as the one in California on a substation that nearly crippled the west coast.  In that case, the perpetrators have yet to be found.  However, risk isn’t just from terrorists conducting a cyber attack or an EMP.  The distribution network of our grid is antiquated and this has been acknowledged by industry leaders themselves.  In 1977 three lighting strikes took down the power in Manhattan and chaos reigned.  Today, our regional grids are even more interconnected which are apt to having a domino effect, shutting down wide swaths of the country.  A coronal mass ejection (CME) from the sun like that which occurred in 1859 would have devastating worldwide impact.  The potential causes are many.

The point being, we who are in the know have been preparing for a mass grid failure and the current administration is the one that appears to be taking the threat seriously.  However, no matter the amount of federal dollars thrown at the problem will save us.  As the President said in response to this report, “We need to improve individual preparedness.”  That’s the place to start: in your own family and homeplace.  Get yourself and your family prepared so that you don’t have to depend on a government agency which may or may not function in a time of crisis.  If you have the financial means, one of the best moves you can make is a move to the mountains of western North Carolina where we can help you find an ideal homestead or bugout property on which you can live and survive for the long haul such as this 102 acre, end of the road farm.  Because rest assured, if the grid goes down over a wide swath of the nation, it could be a very long time before you’d be surfing the internet again.  Best to be prepared.