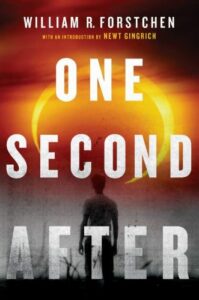 It has been a while since I’ve written about the book, “One Second After” that started me on the path of self-sufficiency learning (i.e. “prepping”) resulting in changing the focus and name of my firm to Retreat Realty, Ltd.  But given recent events over the past month (Afghanistan fiasco and the 20th anniversary of 9/11) it seemed like a good time to revisit the book and how it is relevant to western North Carolina real estate.

A New York times best seller, the book is considered by many to be the impetus of the modern prepper or sustainable living movement.  It takes place here in my town of Black Mountain, NC following the detonation of nuclear devices high in the atmosphere over the United States, resulting in an EMP (Electro Magnetic Pulse) that fries all of our modern electronics.  Sounds like science fiction doesn’t it?   Except is isn’t.  Its a very real threat that has been debated in Congress and various commissions created to counter this threat, albeit no real defense exists.

My point is, we live in a fragile world that could go to pieces very quickly if the convenience and reliability of modern electricity should be unplugged across the board.  The fact is, the more advanced a society becomes, the more susceptible it becomes to small things that can disrupt big things.  The enemies of our country know this and in military terms it has the name “asymmetrical warfare”.  That is, a small player with only minimal weapons can neutralize a much larger opponent and all its massive defense efforts.  That’s what an EMP weapon does.  So what does that mean for you and I?

Its a call to be prepared.  It isn’t just the threat of an EMP that could disrupt your life; it could be a massive hurricane, wildfire, cyber attack on the banking system or flow of gasoline (remember Colonial Pipeline in May?).  How about draconian government rules handed down by self-serving bureaucrats?  The point is, there are many things that can disrupt your daily life for a long period of time, and having a secure, out of the way place in the mountains is a good thing to have if you have the financial ability.  That’s where Retreat Realty comes in.  We know our area and how to help you locate the best property for you and your family.  We can also introduce you to locals who can become trusted friends to support you in a time of need.  But now is the time to prepare, not after an event such as that in “One Second After” happens.  So call us today so that we can help you locate the right bugout property.